Browse the internet with Microsoft's flagship browser on your Mac

Back in the day, running IE was never an afterthought. You did it because it was the best browser around or because you used it on a Windows box at work, and running it at home was a no brainer. Running it on a Mac was a challenge, that is until Microsoft released IE 5 for Mac. 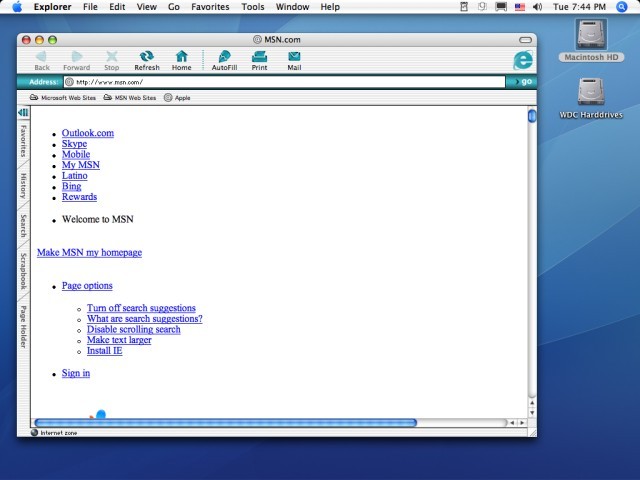 Internet Explorer 5 is the latest version of its flagship browser that Microsoft developed exclusively for Mac users. You can use it on any Mac running Mac OS X 10.6.x or EARLIER.

Internet Explorer 5 for Mac uses a rendering engine called Tasman. It was designed to be more compliant with the W3C standards in HTML 4.0, CSS Level 1, DOM Level 1, and ECMAScript. It also supports the PNG image standard, DOCTYPE switching, Text Zoom and XML source view. It also included an Auction Manager for tracking auctions in sites like eBay and an Internet Scrapbook to allow users to quickly and easily store and organize web content (for example an image or a piece of selected text).

App Con’s: Released in 2002 and not supported since 2005, Wants to install bloatware (Genio), actual app doesn't install until you get past the bloatware install, won't run on OS X 10.7 Lion and later, must use a Mac with Snow Leopard (10.6.x) and earlier

Conclusion: Internet Explorer 5 for Mac is an ok browser. IE is full of security holes, and unfortunately, support for IE 5 for Mac ended in 2005, almost 9.5 years ago as of this writing. The app will NOT run on modern Macs anyway. The app requires Rosetta in order to run, and support for universal (apps that ran on both PowerPC-based Macs and Intel-based Macs) was removed in OS X 10.7, so this app will NOT run on Macs produced after 2010; and with technology that stretches back to 2002, you probably won't want it to, either.

Many of today's websites use technology that are not compatible with IE5 for Mac. MSN.com, for example, will not display correctly in this browser. You're going to run into compatibility issues like this with many websites, just be aware of this as you use the app.